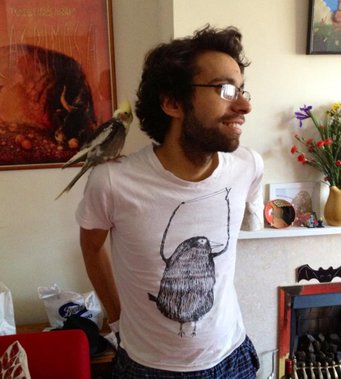 THE SEXES was a hard sell for us. What we thought was a stylish poster seemed to offend just about everyone who didn't have a Prince Albert piercing – and those people made totally incorrect presumptions about the show. But though we flopped like an emo hairdo at the Brighton Fringe of 2010, we experienced something of a Biblical miracle at the Buxton Fringe of the same year. Someone had turned our one audience member into 100. That someone was John Beecher, who as part of Underground Venues' Front of House team recommended our show to every punter stepping through the doors.

We'd met John in Buxton the previous year, and spent our evenings discussing Pascal and Kierkegaard. OK, maybe not, but we had a barrel of laughs. Not only was this kind human being directing audiences to our show, but he was sparky, intelligent and wickedly funny company. We cherished those post-show hours in the bar beneath the Old Hall Hotel, and met up with John in both Edinburgh and London since.

One day, he told us he had cancer. This was a well-read young man working on a thesis about American lynch-mob photography – he was too alive, too loaded with ideas and observations to be overpowered by something like cancer. None of us doubted he would defeat it.

Sadly, cancer defeated him. Nothing can adequately describe the wave of shock that rippled across the country on 12th December, 2012; not only were his family and close friends bereft, but so were the many, many actors, writers, directors and technicians who'd developed friendships with John at the Buxton Fringe over the years.

John Beecher was one of our special finds. A gem of a person we happened to meet, when we happened to be at the same place at the same time. He was our first fan, our first pimp and a beloved friend. As such, we dedicate The Off-Off-Off-Broadway Company to him. While we are devastated by his passing, it has injected us with a clearer purpose: to raise funds for cancer research, and therefore help to keep more people like John here, where they are in short supply.